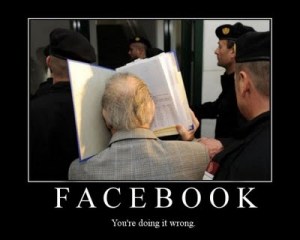 A few months ago – after not posting on Facebook for a while I found myself asking the question – if I don’texist on Facebook, will I fail to exist to people? I wondered – will I slip to the back of their consciousness? Do I have to stay in the forefront of people’s thoughts to have value? But then I thought… do I actually care if my 205 ‘friends’ don’t know what I had for breakfast?

Facebook seems to be less about communication with people and more about portraying a version of yourself to the world. I have a friend who recently posted that Facebookshould be renamed Fakebook. Let’s be honest – most of us at least think about the image of ourselves we are sharing.

I have – like many I’m sure – createdsecret groups on Facebook; groups of friends you can talk to without the rest of Facebook seeing. Isn’t it funny that you have to be secretive on your own wall? Resorting to hiding from Facebook within Facebook. How did we get here?

This Facebook entity knows how old I am, my birthday, sexual orientation, upcoming events, where I am (on a map now no less), what I buy, who I message. There are people I see on a daily basis that don’t know that much about me.

Why is this social phenomenon becoming so infective? Why do I Facebook? The easy answer – I am scared of cutting off the Facebook arm.

Latelythough, overriding the fear is the desire to spend time with the people my life in actual communication.

I’ve wondered if we are losing the ability to talk to our friends? I’m sure we’ve all caught ourselves in the conversation ‘Oh Hi so and so, oh you bought a car/got divorced/have a headache, yeah I know, I saw it on Facebook.’ Gone is the thrill of sharing news and the unplanned responses. We are missing all the joy of telling people things.

Think back to January 2004, not that long ago – there was no Facebook. The exponential growth of this phenomenon is astounding, and it begs the question – how far will Facebook, reach? Where will we see ourselves in the next few short years? Will one day we exist on social networking alone?

Recently, I mistakenly thought a close friend had shared important news – via Facebook alone. I didn’t really believe it, but niggling somewhere in the back of my mind was a seed of doubt. It makes sense doesn’t it? Tell everyone in one group message…. I tried to rationalise it but couldn’t shake the feeling of unease. When I realised I had just missed the late night text message due to poor reception, all was right with the world once again. It did get me thinking though. What really important news have people discovered via Facebook?

Becoming aware of the Facebook influence was sudden, but my decision to Faceoff was gradual. I became hyperaware of my Facebook usage. I couldn’t post. Every time I went to post a thought/ message/ feeling/ action, something inside prevented me from hitting send. I couldn’t see the point. Or more truthfully – perhaps I could. Why was I sharing this version of myself? Was it true? What did I hope to expect? Who was I hoping to attract a response from?

Just when I thought there was no benefit to Facebook along came Joseph Kony and the plight of the Invisible Children. At last, I thought, here is a positive use for social networking. The possibilities seemed endless. I thought – do I really want to turn away from the untapped potential of this media? I was caught in the hype. I thought this would really impact and could possibly shape our future. But it flopped – in a massive  way. Why was something that was viral one month, non-existent the next? Why didn’t it translate to the streets? Is Gen Y so flippant and attention deficit? Did we lose faith? I say we because I had great plans and ideas to Cover the Night but when it came down to it I didn’t participate either.

In the lead up there was such hype, I thought everyone else around the world would be doing so much that if I didn’t put up my one lot of posters it wouldn’t really matter. Maybe that’s what many thought. People expected everyone else to act because the hype was so powerful and yet, it did not translate to real life.

Is it like the reality television voting situation? You are so sure that everyone will vote for someone, so you don’t vote for them and then whoosh – it’s time to leave the island!

Or is it that the faceless on-line world leaves us with little real responsibility? Is it easier to pretend that it’s not us that people are talking to? We don’t have to respond because there are so many people in the group they aren’t really looking at individuals.  With all it’s social connection is Gen Y becoming invisible – are we invisible children?

All night I have been thinking about Facing off today. I had to post a final message so that people would know where I was going. I thought about not doing this and seeing what happened. But I decided against it. I don’t want to disappear – part of my purpose is to re-connect with people not disconnect.

In 2010, research was published in the Elon Journal of Undergraduate Reasearch which claimed that students who used but decided to quit social media showed the same withdrawl symptoms as drug addicts quitting their stimulant.

Ok I’m not there, but I was pretty anxious about singing off this morning. I spent some time making sure I could get back on, I re-assigned groups to enable them to continue without me. I scrolled though the news feed one last time and checked for any last minute notifications. Yes, I’ll admit, I was procrastinating.

Once I hit the final confirm button (Facebook has a few sneaky tricks to try to get you to stay) I was strangely relieved. This might just be because I have been thinking about doing this for so long it is a relief to finally be here, but maybe it is more. We shall see.